Love At First Sight: A Myth

Love at first sight.
Finding your one and only match.
Love makes all good, and lasts forever.
And once you have had that first kiss you shall live forever and ever, happily ever after.

Now, I'm not trying to depress you, but love at first sight is silly and unreal. It doesn't happen. One can argue for infatuation at first sight. That I'll go for. But not love.

First off, we need to understand what love really is.

Love isn't this magical thing that makes two people have to be together forever.

Love is the outcome of doing. Love can be performed to people we don't know or even like. Because love is giving, even when there's no receiving involved.

Some things about true love:

It is sacrificial.
It is unselfish.
It isn't ruled by feelings.
It is stronger than passion.
It is rational.
It always does what is right for the other person.
It affects more than just a couple individuals.

So, on that note, can you see why I don't think it's possible to find true love at first sight?

Not that I don't think people can't say, "Yeah, that's the person I'll end up marrying" and that it won't happen.

Many people have done it, and were married.

But many people have also said that, and then the feelings passed, and they didn't marry that person they were certain they would. So, the rare example of it happening isn't a proof for love at first sight.

And I would still argue that the person saying those words wasn't actually in love.

Why? (I love this word... it leads to much intellectualism)

Because it was just infatuation. Not love. There was nothing real there. Nothing to make them stay committed.

100% attraction and infatuation. Nothing more.

The misconception of love and infatuation, I believe is the cause of so many divorces and unhappy marriages. Two people who are "clearly in love" marry. But then the passion fades. Life hits.

And oh, my, what happened to that feeling of love?

"I must have married the wrong person!?"

Which brings up my next point.

There isn't a right person for you.
(I'm just a mean person today ;D)

If there was just one perfect match for every one, then of course divorce would be more excusable.

Also, if there were just one person meant for each individual, marriage after the death of a spouse would be very wrong.

Magic couples, meant to be together forever just isn't a thing.

If so, why are there so many unmarried(singles)? Did God just decided not to make them someone special?

No. Marriage is a higher thing than just "It's all about you and me."

Marriage has a purpose. It's about two people coming together to honor God and each other, and raising a family *to take over the world for God*. HAHA. Disregard that last part, if you like. 😉

It wasn't until recently that culture has changed the true meaning of love, marriage, and such.

Just look at history. It is full of women being "forced" or sold into marriages, arranged marriages, betrothals, and matchmaking.

And despite what our media tries to say, I think most of those girls (and definitely, guys ;b) were happy with their practices. It was what they were accustomed to. It was their life. They expected to not choose their partner.

And most were happy.

Few girls felt like they were prisoners trapped in a life they had no control over. (I don't care what fiction tries to depict, they didn't). Most wanted this life that their culture held up as the ideal.

In fact, in Bloody Mary of England(1500's) begged her father(King Henry, the VIII) to arrange a marriage for her.

Anna Komnene( Byzantine princess, historian, 1083-1153) grew up always expecting an arranged marriage of some sort. And when she did marry she had a very (too) successful marriage.

If love is what should initiate the thing, if there are only two people meant for each other, how did so many people survive before it was acceptable to find your own spouse?

*let me just add that I'm not for my parents arranging a marriage for me. I'm too caught up in this culture to just go for that, lol. I'm just addressing the mindset - not the formula.*

The thing is mindset.

It's all about that.

They weren't looking for the one, they just wanted some one.

They knew what their expected roles in marriage were, and most people had the sense to follow them.

They understood marriage had a purpose, and embraced that purpose.

I mean, I'm sure people still had to deal with sin, but the difference is most people actually dealt with their problems - or just lived with them.

And so, can you see why I don't believe in love at first sight, or finding the one?

I'm sure this is all strange... but honestly, in this day and age, could things get stranger? Lol.

I'd also like to share this quote that my married friend, Esther, believes captures the idea of love extremely well:

Colleen North: [Helen is about to have a baby] I know this is a terrible time to talk about it, but Larry says...
Frank Beardsley: I've got a message for Larry. You tell him this is what it's all about. This is the real happening. If you want to know what love really is, take a look around you.
Helen North: What are you two talking about?
Frank Beardsley: Take a good look at your mother.
Helen North: Not now!
Frank Beardsley: Yes, now.
[to Colleen]
Frank Beardsley: It's giving life that counts. Until you're ready for it, all the rest is just a big fraud. All the crazy haircuts in the world won't keep it turning. Life isn't a love in, it's the dishes and the orthodontist and the shoe repairman and... ground round instead of roast beef. And I'll tell you something else: it isn't going to a bed with a man that proves you're in love with him; it's getting up in the morning and facing the drab, miserable, wonderful everyday world with him that counts.
[Leaving the house, they say good-bye to the little kids]
Frank Beardsley: I suppose having 19 kids is carrying it a bit too far, but if we had it to do over who would we skip... you?
Helen North: [getting into the car] Thank you, Frank. I never quite knew how to explain it to her.
Frank Beardsley: If we don't get you to the hospital fast, the rest of it's going to be explained right here!

If you think about it, the ideas expressed in this quote are quite unique. And the movie is very cute, too :)  Though this post wasn't meant to review a movie, lol!

We need to think about some of these things and apply them to our thought lives... we need to influence our minds towards thinking about things in perspective. Because, believe it or not, these are some very important aspects in all of our lives today.
Posted by Keturah Lamb at 12:00 AM 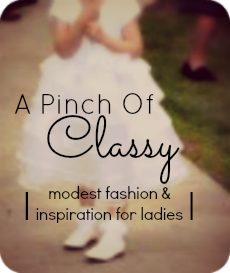 At A Pinch of Classy, we strive to promote Biblical womanhood and true modesty, for ladies of all ages.

Modesty is so much more than just what you wear! And we aim to help show you how you can honor God not only with your body but with your entire being. 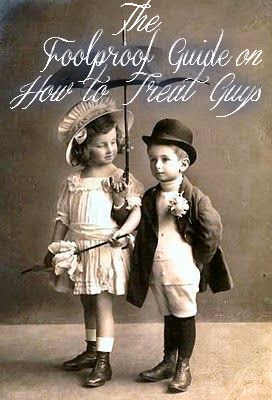 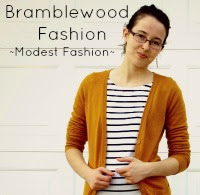